Translation positioning in a multilingual Europe

Developing a world-class European translation industry, combining the latest technological advances with a new generation of highly qualified and highly competent translation experts remains one of the major pathways to completing the European multilingualism agenda, alongside language learning. Although representing over 40% of the world translation market, and being home to the world’s largest institutional translation and interpreting bodies (EU Commission and Parliament T&I services), the European translation industry has remained very fragmented, while universities have been criticised by employers for not preparing students sufficiently for the increasingly competitive world of commercial professional translation.

The influence of the European Master’s in Translation and OPTIMALE

Great advances have been made over the past 4 years in improving the relevance of academic translator training and the employability of translation graduates. In particular, the European Master’s in Translation (EMT) initiative launched by the Commission’s DGT in 2009 has hastened the emergence of a recognised quality standard in advanced translator training.

The OPTIMALE Academic Network project, with 70 academic partners and the European Union of Associations of Translation Companies (EUATC), has achieved significant advances from October 2010 to September 2014 in identifying the adequacy between current academic translator training across Europe and the needs of the industry and translation professions. 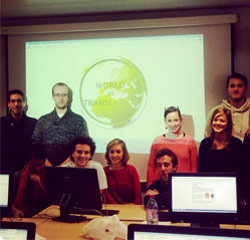 Tradutech as one of the oldest European projects in translation

The “Tradutech” approach of collaborative technical translation was an early successful experiment in this area, initiated and developed by Professors Daniel Gouadec (Rennes 2) and Hugo Marquant (Institut Marie-Haps, Brussels), in the late 1990s involving a number of European universities (including three of the current partners). However, the multilingual collaborative dimension was not fully implemented due to technical challenges. Current online collaborative technologies make it now possible to lead truly collaborative work between teams of students working simultaneously in different locations.

The EMT/ OPTIMALE recommendations and the former Tradutech experience will enable the OTCT partners to reinforce the introduction and integration of professionally-oriented practices within a classroom context.

Project-based learning and teaching is recognised throughout the educational system as a way of implementing academic competences, increasing student preparedness for the professional environment and enhancing personal and social skills in terms of team work and team management.